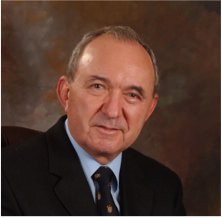 The Hon. Richard J. Goldstone was a judge in South Africa for 23 years, the last nine as a Justice of the Constitutional Court. Since retiring from the bench he has taught as a visiting professor in a number of U.S. Law Schools. Most recently has been teaching at Georgetown University Law Center and the Central European University in Budapest. From August 1994 to September 1996 he was the chief prosecutor of the United Nations International Criminal Tribunals for the former Yugoslavia and Rwanda. He is an honorary member of the Association of the Bar of the City of New York, a foreign member of the American Academy of Arts and Sciences and a member of the boards of Physicians for Human Rights, the Center for Economic and Social Rights, the Salzburg Global Seminar, and Fordham University’s International Institute for Humanitarian Affairs.