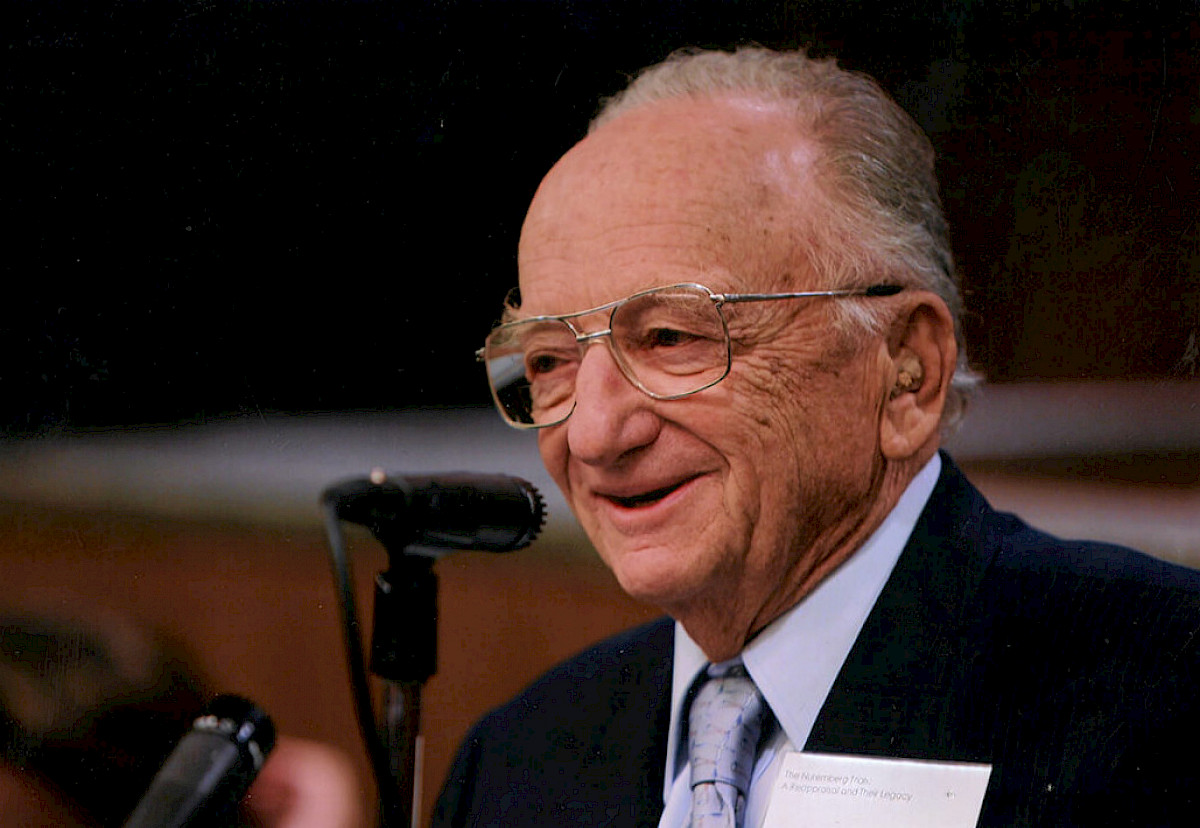 Chief Prosecutor for the United States in the Einsatzgruppen Trial, Nuremberg Trials (1947-48)

Benjamin B. Ferencz was born in the Carpathian Mountains of Transylvania in 1920. When he was ten months old his family moved to America (specifically, the “Hell’s Kitchen” neighborhood of Manhattan).  Mr. Ferencz attended the City College of New York, and won a scholarship to Harvard Law School where he worked as a researcher for a professor doing a book on war crimes. After Ben graduated from Harvard Law School in 1943, he joined an anti-aircraft artillery battalion preparing for the invasion of France. As an enlisted man under General Patton, he fought in most of the major campaigns in Europe. As Nazi atrocities were uncovered, he was transferred to a newly created War Crimes Branch of the Army to gather evidence of Nazi brutality and apprehend the criminals.

In his 1988 book, Planethood, Ferencz writes: “Indelibly seared into my memory are the scenes I witnessed while liberating these centers of death and destruction. Camps like Buchenwald, Mauthausen, and Dachau are vividly imprinted in my mind’s eye. Even today, when I close my eyes, I witness a deadly vision I can never forget-the crematoria aglow with the fire of burning flesh, the mounds of emaciated corpses stacked like cordwood waiting to be burned…. I had peered into Hell.”

On the day after Christmas 1945, Ferencz was honorably discharged from the U.S. Army with the rank of Sergeant of Infantry. He returned home and was promptly recruited by General Telford Taylor to return to Germany to help in the additional war crimes trials. He was appointed Chief Prosecutor in what was aptly described as the “biggest murder trial in history” - the “Einsatzgruppen case.” All 22 defendants, including six SS Generals, were convicted of murdering over a million innocent men, women and children. 13 defendants were sentenced to death. Ferencz was then 27 years old and it was his first case.

According to Ferencz, “Nuremberg taught me that creating a world of tolerance and compassion would be a long and arduous task. And I also learned that if we did not devote ourselves to developing effective world law, the same cruel mentality that made the Holocaust possible might one day destroy the entire human race.” In 1970, with the United States sinking ever deeper into the quagmire of Vietnam, it was only natural that his mind should turn to the need for a peaceful world. After careful deliberation, Ferencz decided that he would gradually withdraw from the private practice of law and would dedicate himself to studying and writing about world peace.

Ferencz’s book Defining International Aggression-The Search for World Peace,  published in 1975,  advocated for certain criminal offenses to become part of an accepted international criminal code enforced by an international court. Ferencz published another two-volume documentary history, An International Criminal Court-A Step Toward World Peace, which was intended to be a tool that nations could use to build a structure for peace. He later published the two-volume Enforcing International Law-A Way to World Peace, and the paperback Common Sense Guide to World Peace, the title influenced by Tom Paine’s historic pamphlet Common Sense. In 1988 Ferencz wrote Planethood with Ken Keyes, Jr. to offer practical steps for the average citizen to take to help establish international law and urge U.N. reform. Receiving critical acclaim from its readers, with over 450,000 copies printed and served as an inexpensive and easy-to-read “Key to Survival and Prosperity.”

With the coming of the 1990s and the end of the Cold War, the international community finally proved ready to discuss seriously the possibility of establishing an international criminal court, and Ferencz remained a voice of optimism. When the Rome Statute was affirmed by vote in 1998, Ferencz addressed the Conference asserting that “an international criminal court - the missing link in the world legal order - is within our grasp.” Since Rome, Ferencz has been active at Preparatory Commission sessions for the ICC, monitoring and making available his expertise on current efforts to define aggression (which is now an international crime covered by the Rome Statute). Ferencz has continued to mobilize support for the ICC and inform an oft-misinformed media about the ICC. He delivered closing remarks in the ICC’s first prosecution, in 2011.

With his wife Gertrude, who died in 2019, Mr. Ferencz has four grown children, among them ICC Project Board Member Prof. Donald M. Ferencz. He continues to write and speak worldwide for international law and global peace.

Read more about Benjamin Ferencz’s life and work, including through transcripts and recordings of his many speeches and writings, at https://benferencz.org/.