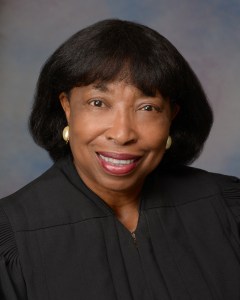 Judge, U.S. Court of Appeals for the Sixth Circuit

Judge, U.S. Court of Appeals for the Sixth Circuit

Hon. Bernice Donald is a Judge on the United States Court of Appeals for the Sixth Circuit. She was nominated to that position by President Barack Obama and was confirmed by a vote in the Senate on September 6, 2011. Prior to that, Judge Donald sat on the U.S. District Court for the Western District of Tennessee, appointed by President Clinton and sworn into office January 1996. She previously served as Judge of U.S. Bankruptcy Court for the Western District of Tennessee, becoming the first African American woman in the history of the United States to serve as a bankruptcy judge. In 1982, she was elected to the General Sessions Criminal Court, where she became the first African American woman to serve as a judge in the history of the State of Tennessee. She received her law degree from the University of Memphis School of Law where she has served as an adjunct faculty member. She also serves as faculty for the Federal Judicial Center and the National Judicial College. In 1996, Chief Justice Rehnquist appointed Judge Donald to the Judicial Conference Advisory Committee on Bankruptcy Rules where she served for six years.

Judge Donald is extremely active in the American, Tennessee, and Memphis Bar Associations. She has previously served as Chair of the American Bar Association (“ABA”) Center for Human Rights, Chair of the ABA Criminal Justice Section, as Secretary of the American Bar Association and as a member of the ABA House of Delegates. As Chair of the Criminal Justice Section, she focused on issues concerning implicit bias, children of incarcerated parents, mass incarceration, and the collateral consequences of incarceration. She also contributed to an implicit bias resource book for judges and practitioners titled, Enhancing Justice: Reducing Bias (ed. Sarah Redfield) and has conducted extensive trainings on implicit bias. She continues leadership roles in many ABA sections and groups, including as Chair of the Center for Human Rights’ Dignity Rights Initiative and as a member of the Steering Committee of the International Criminal Justice Standards Project.

Judge Donald has served as faculty for international programs in more than 20 countries. In 2003, Judge Donald led a People to People delegation to Johannesburg, and Capetown, South Africa and also traveled to Zimbabwe to monitor the trial of a judge accused of judicial misconduct.

Judge Donald has been the recipient of over 100 awards for professional, civic, and community activities, including the Distinguished Alumni Award from the University of Memphis, the Martin Luther King Community Service Award, the ABA Commission on Women in the Profession’s Margaret Brent Women Lawyers of Achievement Award, and the ABA Commission on Racial and Ethnic Diversity in the Profession’s Spirit of Excellence Award, and the inaugural ABA Tort Trial and Insurance Practice Section’s Lifetime Liberty Achievement Award.