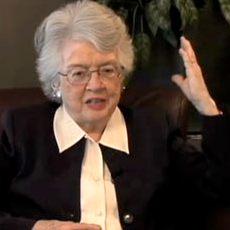 Chief Judge for the U.S. Court of Appeals for the District of Columbia Circuit (1979 – 1999) Judge at the International Criminal Tribunal for the former Yugoslavia (1999-2002)

Chief Judge for the U.S. Court of Appeals for the District of Columbia Circuit (1979 – 1999) Judge at the International Criminal Tribunal for the former Yugoslavia (1999-2002)

Hon. Judge Patricia Wald was appointed by President Carter as the Chief Judge for the U.S. Court of Appeals for the District of Columbia Circuit in 1979, and became the first woman appointed to the D.C. Circuit Court. She is also a former judge at the International Criminal Tribunal for the former Yugoslavia She was appointed to the President’s Commission on Intelligence Capabilities of the U.S. Regarding Weapons of Mass Destruction, and served on the Constitution Project’s Guantanamo Task Force. Judge Wald’s career has focused on activities involving civil liberties and international non-governmental organizations as well as governmental positions.

The Hon. Judge Wald has received numerous honors and awards including more than 20 honorary degrees. On November 20, 2013, she was awarded the Presidential Medal of Freedom, the nation’s highest civilian honor, and was recognized by the Constitution Project as the 2011 Constitutional Champion. In 2008, she was the recipient of the American Bar Association’s highest honor, the ABA Medal, and was the recipient of the Margaret Brent Award of the National Association of Women Judges. In 2004, Judge Wald also received the American Lawyer Hall of Fame Lifetime Achievement Award, and was honored by the International Human Rights Law Group for her lifelong commitment to Human Rights in 2002. Additionally, she is the author of 3 books and over a hundred articles on topics ranging from civil rights, the environment, federal procedure, drug policies, international tribunals, gender rights and bail reform. Judge Wald graduated from Connecticut College, and obtained her J.D. from Yale Law School.