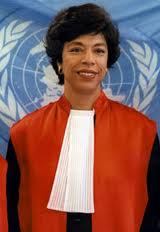 Hon. Judge McDonald is the former President of the International Criminal Tribunal for the former Yugoslavia (ICTY), a position she served as from 1997 to 1999. She is the only woman to occupy the tribunal’s presidency since its establishment. As the presiding judge in Trial Chamber II, she issued the tribunal’s verdict against Duško Tadić, the first international criminal trial since the Nuremberg Trials and the International Military Tribunal for the Far East. Judge McDonald was one of the first eleven judges elected by the United Nations to serve at the ICTY. Recently, she retired as one of three American arbitrators on the Iran – United States Claims Tribunal in The Hague.

Formerly, Judge McDonald was a judge at the U.S. District Court for the Southern District of Texas. She also served in the NAACP Legal Defense and Educational Fund in early years, canvassing Alabama, Mississippi, and Georgia to assist local residents and lawyers with issues involving school desegregation, equal employment, housing, and voting rights. She has received numerous awards and honors including the First Equal Justice Award and Ronald Brown International Law Award from the National Bar Association, the Open Society Institute’s first Women Groundbreakers in International Justice Award, and the Dorothy Height Lifetime Achievement Award. Judge McDonald attended Boston University and Hunter College for her undergraduate education and Howard University School of Law where she received a J.D.